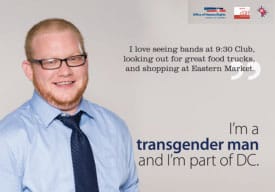 Dear Rita: I manage a small team of employees in a close-knit office. Recently one of my employees told me in private that “he” is becoming a “she.” I’m not sure how to deal with this. Do I call the employee “him” or “her”? I think when the other employees see him coming to work in women’s clothing, they’re going to freak out. What if he wants to use the women’s restroom? I’m in totally over my head here!

— Sincerely, Trying to Do the Right Thing

Dear Trying: This situation may be uncommon but it doesn’t have to be difficult!

For example, an individual might express their gender through the way they dress, their mannerisms, even their voice. Transition refers to the process of changing gender from the gender assigned at birth to the gender the individual identifies as. There is no set amount of time for the transition, nor is there a one-size-fits-all approach.

The employee has approached you because she needs your support with how her transition is going to be handled at work. In a small office like yours, the employee may prefer to tell her colleagues individually. Let  employee decide how much information she is comfortable sharing. Many transgender employees report that they have been asked intrusive questions by their colleagues like, “Are you going to have surgery?” An employee who is goin

g through gender transition doesn’t have any less of an expectation that their medical information should be treated confidentially.

It’s okay to ask the employee what gender pronoun they prefer. Most people in a male-to-female (MTF) transition prefer to be referred to with female pronouns. If the employee has a male-gender name, she may also request to be referred to by a new female-gender name. I encourage you to offer to order new business cards, change the name on her email account, and undertake any of the other practicalities that involve a name change in your nonprofit. Keep in mind that the standards for a legal name change vary from state to state, so the employee’s preferred name may be different from her legal name. Her legal name should be used on certain official documents such as tax forms.

The most common question I receive from employers about a gender transition is about the restroom. Some employers have told me they are worried their female employees will object to sharing a restroom with a colleague they still think of as male. These concerns are often labeled as a “safety” issue. Unfortunately, this comes from the percep tion that people who are transgender are sexual deviants, and somehow dangerous. In truth, there is nothing about transitioning from one gender to another that would inherently create a safety risk for other employees.

The employee feels female, identifies as female, and wants to be treated as female. When you think about it at a practical level, that is actually incredibly easy to do. You just treat the employee as you would any other female employee. And yes, that includes using the women’s restroom!

It is clear that the legal trend is towards protections for transgender employees, but I am not trying to scare you with the threat of a lawsuit. Many of the largest employers in the country have voluntarily adopted policies to protect transgender employees because they want to retain their employees and they believe in the value of a diverse and tolerant workplace. I have included some links to some resources that will help you understand transgender issues and support a smooth transition in your workplace.

I hope that your nonprofit will follow the lead of these companies and work with your employee to make her feel welcome at work, regardless of her gender identity. And although this brief article has only been able to address the question posed, there are many other issues related to transgender and intersexual matters; I’m confident you’ll take the same caring approach everywhere.

The Human Rights Campaign produces the booklet, Transgender Americans: A Handbook for Understanding, and has helpful resources for gender transition at work from an employer’s perspective. Lambda Legal has Model Restroom Access Policies.

To find out more about the laws in your state, check out the guide published by the National Center for Lesbian Rights. Please note that this was last updated in 2010. bit discrimination in employment on the basis of gender identity, even if their state does not have such a law.

* The cover of “Is He A Girl?” is from a third-grade reader.

Siobhan Kelley is an HR attorney at the Nonprofits Insurance Alliance Group (NIA Group), a sponsor of both American Nonprofits and Blue Avocado. The NIA Group provides her legal services (and those of Ask Rita’s other writers Ellen Adridge And Pamela Fyfe) to member-insured nonprofits.